A WAY OUT An association of apartment-buyers submitted a plan to revive Kindle Developers, which failed to deliver homes after accepting payments.

Staff cooperatives have already registered their presence in the list of potential acquirers of Indian companies put into administration. In a first, homebuyers are now seeking to take over property developers sunk in debt, claiming they have the biggest at stake in projects where the bulk of their savings are stuck.

An association of apartment buyers has submitted a resolution plan to revive a Delhi-based builder, Kindle Developers, which failed to deliver homes in Noida after accepting payments from flat buyers. The move comes after Parliament passed in August an amendment to the bankruptcy bill, allowing homebuyers to be treated on a par with secured financial creditors.

The builder is in the bankruptcy process after a homebuyer, Amit Kumar Malik, dragged the company into administration for its failure to deliver the apartment promised, two people with direct knowledge of the matter told ET. “This would be the first case under the bankruptcy code where homebuyers have submitted a resolution plan,” said Anil Goel, the founder of AAA Insolvency, a Delhibased firm involved in bankruptcy cases. “For real estate companies, the biggest problem is the trust deficit.” An email sent to Kashi Viswanathan Sivarman, the resolution professional and a partner of AAA Insolvency, remained unanswered until the publication of this report. The NCLT’s principal bench in New Delhi had admitted the case on March 9 last year.

The builder was expected to develop a 700-apartment residential project called Subh Kamna Lords in Noida Sector 79. The estimated project cost was Rs 300 crore. But the Noida Authority cancelled the project and claimed about Rs 70 crore in default charges. This liability is also part of the insolvency proceedings. “The (buyers’) association has proposed in the resolution plan that it will complete the project by itself after taking the balance payments from home buyers who are also members of the association,” said an executive. 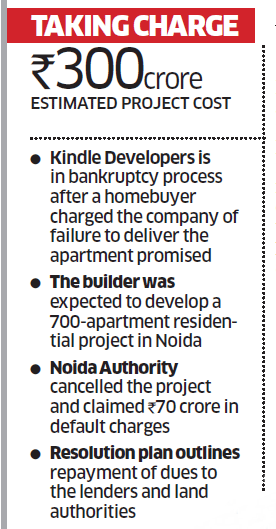